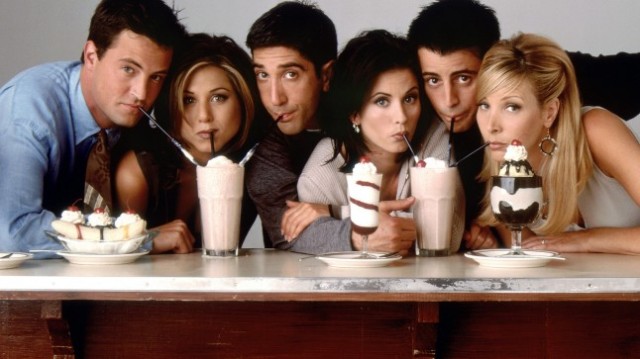 So recently, I’ve rediscovered Friends.  Now, that’s not to say that I’d forgotten about it, or that I hadn’t been a fan in the first place.  it’s just that so much time had passed and so many new shows had come around that I’d sort of let it gather dust in the corner.

Well, a few weeks ago I decided I was in the mood for some comedy (I know, weird, right??) and I dusted them off and started watching them.

And man, had I forgotten how awesome they are or what??  It’s making me happy to revisit the happy (and not so happy) moments of my favourite dysfunctional-and-crazy-yet-loving-and-loyal group of friends.

In case you spent the decade the show was on TV living under a rock, it follows the lives of 20-somethings Ross Geller (David Schwimmer), Monica Geller (Coureney Cox), Rachel Green (Jennifer Aniston), Chandler Bing (Matthew Perry), Phoebe Buffay (Lisa Kudrow), and Joey Tribiani (Matt LeBlanc) as they try to make a life for themselves in New York City.

On the show, the friends had their ups, their downs, their good relationships, their bad ones.  They were happy and successful.  They had shitty jobs, and were unemployed, and at times had no idea what they were doing with their life.  It’s weird, because I couldn’t really identify with them when the show was on (I was 10 in 1994), but I can now.  Now I can see why it was so funny, or so sad, or so happy, or so heartbreaking.

I can totally understand why it’s hard to let them go.  But yesterday and today have been crazy with rumours and stories about a new season of friends coming in 2014.  Star Media, an outlet I’ve never heard of, seems to have “confirmed” with NBC there will be a new season.  Since I immediately called bullshit, I decided to do some research.

Sadly, that research was not only super easy (way to be gullible, Internet!!) but also sad: there will be no reunion.  In fact, Marta Kauffman, the series creator, has confirmed to E! Online that not only is there no reunion planned, there will never be a reunion.  Never.

It’s sad that it’s not coming back, but honestly, I’d rather have it end the way it did than have to remember a badly done movie where they all try to get the same chemistry they had ten years ago.  It would never work.

But it doesn’t mean I’ll ever stop re-watching them!!  And you shouldn’t either.