I heard this poem in a movie today (“In My Country,” if you’re wondering), and I loved it.  Abso-freaking-lutely LOVED it.  I’m now trying to find a way to put it up on my wall somehow: either in a print, or in stencil, or wire, or something.  Anything!!  LOVED IT.

Of course, I had to share it.  It’s only half a poem, but the second half doesn’t really add anything for me, so I’m good with just those four lines.  You can read the rest here if you’re interested.  You can also read all about Langston Hughes here or read more of his poetry here.

I’m not usually big on poetry, but I loved this one.  I can now add it to the very few poems I love.

The only other one I love to death is The Riddle of Strider by J.R.R. Tolkien:

All that is gold does not glitter,
Not all those who wander are lost;
The old that is strong does not wither,
Deep roots are not reached by the frost.
From the ashes a fire shall be woken,
A light from the shadows shall spring;
Renewed shall be blade that was broken,
The crownless again shall be king.

Sadly, it wasn’t used in the movies where it should have been.  The second half was said by Arwen during the Return of The King.  I think it was when they were fixing the sword to give to Aragorn.  But seriously, I don’t care what kind of nerd it makes me, but it is my favourite poem ever.

I guess now I’ll just wait for their tour.  I may have heard rumours that it’ll be with Incubus, which their site tells me is happening this summer.  You know, Tinley Park, IL and Cincinnati, OH aren’t too far for me to drive.  It’s gonna be so freaking awesome!!

So here’s their new single from their upcoming CD, “Living Things,” coming out June 26.

I still remember how much I loved “One Step Closer” when it came out way back when I was like 15.  I loved it, and I soon loved everything they touched. Some of my favourite songs were “Breaking the Habit,” “Somewhere I Belong,” and “Pushing Me Away,” and they were also my go-to songs when I was feeling angry, sad, or just like and angst-filled teenager.  “In Pieces” is my all-time favourite song, with “Waiting For The End” a close second.

I’ve seen them live only once, but it was awesome.  Half the band was late (I believe it was for customs reasons), and the two singers, Mike and Chester, did some acoustic songs while they waited for the rest of the band.  I’ve been to shows where bands think it’s okay for them to make you wait 2 hours while they party backstage (I’m looking at you No Doubt!!), but LP, even though they had a legitimate reason, came out to keep us entertained and apologize for the delay.

They played the acoustic set, and then, once the whole band was there, they still did a whole set.  And they were incredible!!

I’m not really a comedy fan.  Don’t get me wrong, I like funny.  I like stand-up, and there are some comedies that I enjoy.  I’m not a fan of gross, bodily-fluid, disgusting comedy, and a lot of the comedies lately have been like that.  I didn’t like 40 Year Old Virgin, I didn’t really like Knocked Up, and I definitely didn’t like Dumb & Dumber.  I don’t like Jim Carey (except in his serious roles), I don’t like Steve Carell, and I don’t like Will Ferrel. 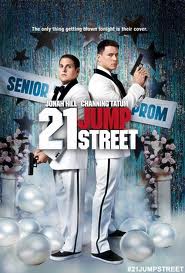 But last weekend, my brother suggested going to watch 21 Jump Street.  I wasn’t really excited about it (by which I mean I tried to fight it and was outvoted).  So off I went to watch it with my sibling.

I actually liked it.  I mean, it’s not a movie I could watch over and over again, but it was much more entertaining that I expected.  If you’re looking for great, Oscar-winning acting, this is definitely not the movie for you.  If you just want to be entertained, check it out.

The movie is about two guys, Schmidt (Jonah Hill) and Jenko (Channing Tatum), who have joined a new police task force housed at 21 Jump Street.  They are to use their youthful appearances to go back to high school and infiltrate a drug ring that’s making a deadly new drug.

To me, the funny began once they were back in school.  In their actual high school days, Schmidt was a nerdy, Eminem wannabe who was incredibly uncool. Jenko was the athletic, charismatic, hot popular guy who loved to make fun of him.  They both ended up at the police academy and hit it off: Jenko helped Schimdt with the physical part, and Schmidt helped Jenko with the academic.

But now they’re back in school, and the cool has changed.  Dumb jocks aren’t the cool in-crowd, that now belongs to the environmentally friendly, university-bound smart kids, led by Dave Franco.

Not only do Jenko and Schmidt have to deal with a completely different high school environment they’re used to and find a way to not fuck up their new, inverted social status, which neither had prepared for, but they accidentally switch fake identities.  This leaves Jenko in the AP classes while Schmidt attempts to live up to his supposed state-level track winnings.

With the exception of a few scenes which I felt were dumb and pointless, it was a pretty good movie.  It has a fantastically useless and implausible car chase scene, but even that added to the funniness of the movie.  The fact that the trade off, between the high-schoolers and hard-ass bikers, is done with piñatas, is hilarious.  The labeling of all the stages the drug takes you to is pretty awesome.  And their party??  Epic.  And the gunfight scene at the end??  Hilarious.

The short cameo by original 21 Jump Street actors Johnny Depp and Peter De Louise add a happy little surprise for anyone who was a fan of the original (or who love Johnny Depp).

And did I mention Channing Tatum looks hot??  ‘Cause he does.

I don’t really have a rating system, but I would give this movie a 7 out of 10.

So the way I work with music is that while I like a lot of music, and I love a lot of artists, at any given time there are one or two songs that I am more than obsessed with.  I will listen to these songs, on repeat, all day without stopping.  If it comes on the radio, I will listen and sing along.  If it’s on TV, I will do the same.  If I’m at home, I’ll play them.  Or Youtube them if I don’t have them yet.

What I wanted to do is share my current obsessions.  So right now they are Kelly Clarkson‘s “What Doesn’t Kill You (Stronger)” and Fun‘s “We Are Young” featuring Janelle Monáe.

Check them out.  I think they’re pretty awesome.

And here is Fun:

Maybe when the obsession changes, I’ll put up the new ones!!  Enjoy!!

I hit writer’s block, and then I got a spurt of ideas for fiction stories, and I wanted to write them.  So I’ve got quite a bit worked out and chapters written, but sadly, that left this site with no updates.

Well, at least not for a while.

So here I am again, and hopefully the updates will keep coming!!