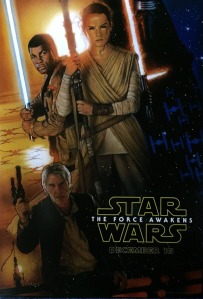 Then the trilogy of prequels came out.  Now, I’m not a die-hard über fan who can speak Chewbacca or whatever, but even I, at the young age of about 15, was incredibly disappointed with these movies. I can’t say if it was the bad acting, the shitty script-writing, or the stupid characters, but I hated it.  Hated. As in, I saw them once and refused to ever watch them again.

And now we’re a little less than two months away from the start of a third trilogy, and I’m beyond excited. I was skeptical at first, and I still am a little, but the closer the date gets, the more excited I get!!

END_OF_DOCUMENT_TOKEN_TO_BE_REPLACED

I know, I know, it’s been so long since we’ve seen each other…but hopefully that’s all about to change!!  Yes, you heard it right, I plan to update this blog much more often.  Let’s be totally honest, it probably won’t be as often as I’d like, but it’ll definitely be much more of then than I’m currently doing it!!

So what to talk about??  So much has happened!! What’s new in the world of pop culture that I love and want to discuss??

END_OF_DOCUMENT_TOKEN_TO_BE_REPLACED

The zombie apocalypse is probably one of the most terrifying, although far-fetched and hopefully impossible, things that could ever happen.  No matter which writer’s or director’s version of zombies you think of, they’re pretty terrifying.  They don’t sleep, they don’t need rest, they can’t be reasoned with.  They’re out for your blood (or brains, whatever), and nothing will stop them.  Total war, as they say.

Of course, most movies use the slow-moving, single-minded, follow-the-food zombie, which is scary, but can thankfully be outrun if you meet just one or two.  Then there’s the fast zombies that can run and climb and swarm and will fuck shit up.  They’re even more terrifying.  And, if that isn’t scary enough, in zombie master’s George A. Romero‘s Land of the Dead, the fourth movie of his Living Dead series, the zombies are actually beginning to think and plan their attacks.

Yes, they scare me. Now, I don’t actually believe that the zombie apocalypse will happen, but that doesn’t make it any less frightening for me.  Like most people, I have always been fascinated by the idea of zombies.  Besides Romero’s work, shows like The Walking Dead and movies like Warm Bodies and 28 Days Later have just fed that fascination.

So this week I decided to go all out and scare myself and watch Brad Pitt‘s World War Z, which I then followed by reading the novel of the same name by Max Brooks.  Not only would I get my fill of zombie shenanigans, but I’d see what the big hype was about on both the movie and the book.

END_OF_DOCUMENT_TOKEN_TO_BE_REPLACED

To continue my trend of talking about new movies I’ve watched a week after I’ve watched them, last weekend (well, 10 days ago) I went to watch the horror film “The Cabin In The Woods.”  All I knew about the movie was what I’d seen in the trailers, although to be honest, that’s quite a lot of the whole story.  And still, there were a few surprises. 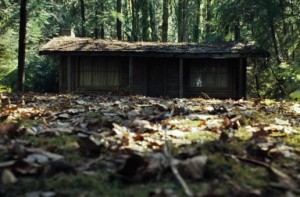 The creepy-looking cabin is much more than it appears. © 2012 - Lionsgate, Inc.

There will be spoilers here.  You have been warned.

Written by Joss Whedon (who also wrote the amazing-ness that was “Buffy the Vampire Slayer”, “Firefly“, and “Dollhouse”) and directed by Drew Goddard (“Cloverfield”), it stars Chris Hemsworth (“Thor”, “The Avengers”), Fran Kranz (“Dollhouse,” Joss Whedon’s upcoming “Much Ado About Nothing”), Jesse Williams (“Grey’s Anatomy”), Kristen Connolly, and Anna Hutchinson as the five college students who are spending the weekend at the isolated cabin.  It also features Richard Jenkins (“The Rum Diary”, “Dear John”), Bradley Whitford (“The West Wing”) as the hilarious control-room techs, and Amy Acker (“Angel,” Joss Whedon’s upcoming “Much Ado About Nothing”) as one of the chemists.

Now, I love horror movies.  Loooooove horror.  And I love anything Joss Whedon writes.  So I went in expecting to love the movie, love the characters, and love the dialogue.

I was not disappointed.

The movie was not what I was expecting. I mean, I knew what it was about, basically, but still it was surprising.  I expected a fairly-standard (although well-written and with awesome dialogue) slasher-style movie, with some sort of creepy voyeurs paying to watch the kids die.  That was not it at all. 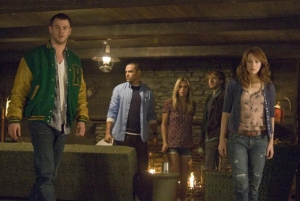 What I got instead was, in my opinion, an incredibly entertaining, smart, funny movie.  Not comedy haha, and not even shitty horror movie haha, just the smart, witty, fairly self-deprecating dialogue that Joss Whedon is known for.

Although the movie did have its stereotypes, like the outside boob scene (’cause I would so not call it a sex scene) and the ‘let’s split up’ idea, they are obviously manipulated in and done purposely.  It seemed, at least to me, to be almost like a parody at times.

I loved that it had the typical horror movie characters: the alpha male jock, the blonde bimbo slut, the smart guy, the stoner, and the virgin.  In fact, they went out of their way to let us know how they’d altered the kids to make them into the stereotype we were seeing them as.  In fact, the dumb blonde is a nursing student who wasn’t actually a blonde — she’d dyed her hair with a dye that, although she didn’t know, was treated by the chem department specifically to make her dumb.  To get the stereotypical sex scene outside, the ‘puppeteers,’ as Marty the stoner calls them, fill the air with hormones, turn up the heat, and lighten the forest. 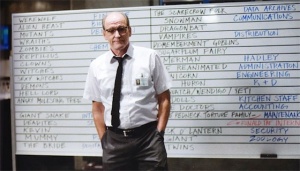 Richard Jenkins stands in front of the list of all the monsters and which departments bet on them. © 2011 - Lionsgate, Inc.

The techs who worked to create the cabin of horrors were also pretty awesome.  Their rapport is hilarious, and although it seemed weird at first that this is clearly just another weekend for them, they’re very vested in the outcome.  They all bet on which of the horrors are going to be unleashed by the kids in the cabin, and all the men gather to watch, hopefully, the possible sex scene.  It’s also shown that similar scenarios are being run all over the world, and the competition between all of them is pretty funny.  And to be honest, the scenario run by Japan, which is shown a few times, is hilarious and totally stereotypical of Japaneses horror movies: young girls are tormented by the spirit of a young girl.  In typical Whendon-style and true to the parody angle of the movie, the Japanese fail, and the school girls are shown singing a friendship song while the spirit is destroyed and the Americans wonder “How hard is it to kill nine-year-old girls?”

One of the best things for me was that in the end, it was only the stoner kid that was aware enough to figure it all out.  They go out of their way to show you that he’s incredibly stoned all the time — from the moment he arrives in a smoke-filled car and proceeds to lock the door and check it but forgets to close the window to the final scene where he lights up — and yet he’s the only one unaffected by anything that’s being put in to influence them.  Unfortunately, he’s too stoned to make enough sense or insist something’s wrong, and since he’s so stoned, no one listens to his paranoia. 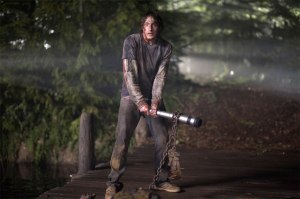 Fran Krantz's Marty wields his extend-a-bong to save the girl from the zombies. © 2011 - Lionsgate, Inc.

So he figures it all out and manages to save the girl before she becomes zombie food (or whatever they do) by beating the zombie with his extend-a-bong.  Yes, a giant bong.  Although it’s an awesome idea, a travel mug that extends to become a bong, the fact that he uses it as a weapon on more than one occasion is kinda really freaking awesome.  Then he takes Dana, the now-saved virgin, to the elevator he’s found when he massacred a zombie (although the audience believed he was the one killed), and they decide to see where it goes.

Now, this scene was my favourite.  At first, they’re surrounded by darkness.  Then they come upon the monsters first monsters– a werewolf, a ballerina with nothing but teeth for a face, a ghost, an über scary-looking guy with blades through his head — and after being terrified, they see that they are just one box in a sea of monster-filled boxes.  Just that idea is terrifying!!  Boxes and boxes and hundreds more boxes of monsters that could be brought out at any time.  Terrifying!!

Kristen Connolly screams as she looks at a monster through the glass. © 2011 - Lionsgate, Inc.

And then the elevator arrives at the same building that the puppeteers are in.  When Marty and Dana are confronted by a SWAT team, they run into a room and find the incredibly convenient yet totally unrealistic PURGE ALL button.  And so every monster is released, slowly in groups of six (or maybe eight, I can’t remember), and they proceed to massacre EVERYONE.

In the end, they’re informed by the Director (Sigourney Weaver) that they’re all being used as part of a yearly sacrifice to Gods known as the ‘Ancient Ones.’  If the ritual is not complete, they will rise up and destroy the world.

How does it end, you ask??  Well, let me tell you:  in typical Joss Whedon fashion, Marty and Dana (after Marty kills the director and Dana is attacked by a werewolf) light up a joint and wait for dawn.  As the sun rises, a giant hand comes out and destroys the facility and the cabin.

But yes, I loved it.  I’d recommend it to anyone.  I find it’s not really a horror, just a smart and funny thriller.

You have no idea how excited I am for Joss Whedon’s next movies: The Avengers and Much Ado About Nothing.  And I may go and watch Buffy again.  Right now.

Joss Whedon wins in my books, every time.

I’m not sure I can adequately explain my excitement.  I will be there on opening night…and I’ll be ready to sing along!!!

Sadly, I didn’t get to watch this when it was playing here a year or two ago.  I did manage to see We Will rock you and Jersey Boys that same year, though, so I did get my happy fix.  But I’m glad they made this a movie.  This way, I don’t have to miss it!!

I may already be playing a few of my favourite 80’s anthems.  SO EXCITED!!!